skip to main | skip to sidebar

Ever wonder what adventurous folks like Lord Byron and the Shelleys were doing behind the closed doors of the Regency drawing room? Me too! Hence my dark, twisted take on the classic "Regency romp" with Lessons Learned, book two of the Eldritch Legacy series. I quite like the brooding Regency rake, and had fun creating an Eldritch son who is just that. I derived equal enjoyment in creating leading lady Camille Rocheford to match Stefan Eldritch's intensity.

And I could not have asked for a better cover artist to capture the look and feel of the story. Anne Cain amazes as always.

And that's before they drink the absinthe! I hope my romp through the manor house with Lessons Learned gives readers a taste of decadence and some much-needed escape.

Posted by Katrina Strauss at 9:36 AM No comments: 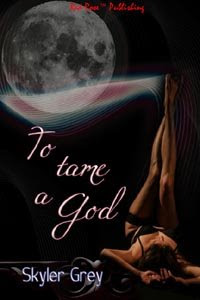 
Teala Vine's has been invited to the infamous Masquerade Ball hosted by the Greek gods on Mt. Olympus. After choosing her favorite god to bring her fantasy to life, will Teala find herself wanting to remain behind or will she realize that reality can be a much better place?

Posted by Skyler Grey at 9:23 PM No comments:

Goodreads.com is giving away 3 signed copies of Reckless Liaisons. If you have a Goodreads account, go here to enter. If you don't have an account, create one and then enter (Goodreads is a wonderful site, you won't regret it!). Winners will be selected on April 20th.

Good luck!
Posted by Kayleigh Jamison at 1:39 AM No comments:

(Print is available through most major retailers online, and in select bookstores – if yours doesn’t have it, ask!)

Was she a second chance at love—
or his golden opportunity for revenge?

Sebastian Cade, reclusive Duke of Rutland, has gone to great lengths to withdraw from the London society he’s come to despise. Still reeling from betrayal and tragedy, he finds himself powerfully attracted to his lovely new raven-haired ward—so much so that he begins to question the last five years of his life.

When Julia Deveraux awakens in the Duke’s rose garden, the memories flood back. A betrothal she detests. The great black horse stolen from her father. Her near escape … Now under Sebastian’s care, she sees the rumors of his disfigurement are far from true. But will her secret connection to his sworn enemy tear them apart before love brings them together?

"Kayleigh Jamison has written a Regency romance that is titillating and amusing, fast-paced and well-crafted, luscious and seductive all at once. The characters and story will quickly pull you in and leave you wanting more as you turn each page. The author has written a book that has the reader laughing one moment, and feeling hot and bothered the next. I will eagerly be looking for Ms. Jamison's next book."
Night Owl Romance

"Good read! RECKLESS LIAISONS is a well-constructed story with each character having their own voice and distinctive personality. It is a historical account of London society filled with Dukes, Earls and debutantes that makes you wish you too were a Lady or Gent. Never a dull moment, this story is engaging with its well constructed climaxes and conversational tone. This intriguing story involves all my favorites: gentlemen, galas, power, deceit, handsome faces and of course romance."
Coffee Time Romance

http://www.kayleighjamison.com
Posted by Kayleigh Jamison at 12:09 AM No comments:

His Grace is Pleased...

Danya at Night Owl Romance has reviewed Reckless Liaisons, and it's good news:

"Kayleigh Jamison has written a Regency romance that is titillating and amusing, fast-paced and well-crafted, luscious and seductive all at once. The characters and story will quickly pull you in and leave you wanting more as you turn each page. The author has written a book that has the reader laughing one moment, and feeling hot and bothered the next. I will eagerly be looking for Ms. Jamison’s next book."
The book will be released March 1st. Stay tuned for a great contest to gear up for release, coming soon!
Posted by Kayleigh Jamison at 7:54 PM No comments:

The Spoils of War Now Available!

Victory always comes with a price.

The Duke of Wellington, hailed as one of the greatest military generals in English history, defeated Napoleon and brought peace back to Europe. But what if he had help? And what if that help was the god of war and manliness? What would a bored immortal ask for in return?

Excerpt:
The Duke of Wellington was not pleased to be roused in the middle of the night by a visit to his bedchamber. Clad only in his dressing gown and heavy red velvet robe, he sat in the large overstuffed chair by the fireplace, a tumbler of brandy in one hand and a smoking cheroot in the other. Irritation sketched across the hard, battle-weary lines of his face as he regarded his guest. "I wondered when you would come," he grumbled. The visit was not unexpected, nor was the hour. The first time he'd entertained the Greek god of war had been at a similar uncouth time five years before, though then he'd been in his tent, and not sleeping, too consumed with worry over the possibility of defeat at the hands of Napoleon. Of course, then he'd had a pistol and sword nearby; he wished he had them now, though he knew they'd have little effect upon a god. Prior experience had taught him that, as well.
"I've given you time to rest now that you're home," Ares replied calmly. His accent was subtle, unidentifiable, but distinct. "I upheld my end of our bargain. The little Frenchman is defeated, you have your victory, and your glory. Now I want my prize."
"You must, at long last, tell me what it is you desire," the general countered. Victory for you, the spoils of war for me, Ares had proposed. You won't tell me precisely what you want, Wellington had countered, because you think I'm too desperate to care. The god had smiled and simply replied, yes. And he'd been correct.
Ares shrugged his well-muscled shoulders. He was dressed oddly, as he'd been in that first meeting, a linen tunic barely visible beneath a silver and gold breastplate, with large black horses decorating the sculpted pectorals, flame and smoke curling from their nostrils. A cast brass and silver belt circled his waist, and thick leather pteruges hung from waist to knee. The ensemble was topped with a blood red cape, fastened around his shoulders with a gold, jewel-encrusted pendant the size of a fist. On his feet were sandals with straps that wrapped around his feet and ankles, leather styled with more gold. The outfit of a Roman warrior, one who preferred his Greek name. "A simple thing, given your influence and status. I want a woman."
Posted by Kayleigh Jamison at 6:28 PM No comments:

Can I Please Count On Your Vote? :)

I'm sending out a humble plea to all my friends and family asking for your votes at, Preditors & Editors! I would be ever so greatful!! Just click onto the links below and they'll take you to the voting polls.


I've been nominated at Preditors & Editors for,


http://skylersromance.tripod.com/skylerscove
Posted by Skyler Grey at 2:03 AM No comments:

Only In Her Dreams by Veronica Towers